Sometimes, we just need a break after we have gone through a lot of things to make ourselves peaceful and calm. It is through a quick pause in our life where we can temporarily forget our problems and just appreciate the beautiful things around us. As for me, the first two months of the year have been tough in some aspects, so I wanted to take a retreat somewhere far from my city where I can see new faces and new places. After moments of finding an escape, I finally decided to visit The City of Pines. 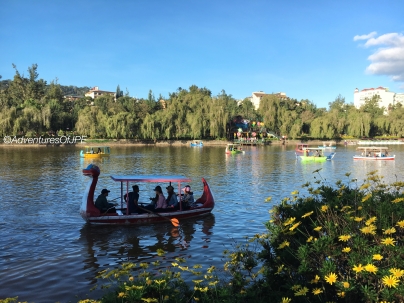 Baguio City is a highland destination in Northern Luzon that boasts a cool temperature, scenic panoramas, a colorful flower festival, and countless pine trees, thus its nickname. One of the most visited places in the country, it is a neighborhood full of local and foreign tourists, as well as a number of students including East Asians pursuing to learn English through a number of educational institutes around.

Ever since childhood, I’ve never been to the Summer Capital of the Philippines. Only in 2018 I thought about going to this place. I spent one of my weekends there last February and it was a memorable trip for me, and here my story goes.

February 16 – Cubao, Quezon City: I took a Victory Liner bus from Cubao Station straight to Baguio City. My trip was scheduled at 11:45 pm and it costed me PhP 450 for a 6-hour journey.

February 17 – Baguio City: As I woke up to the sunrise which could be seen at the bus window, I peeked at the mountains of Benguet shined upon by the scattering rays of sun. It looked like a warm welcome to me.

I alighted at the terminal station and started walking towards Burnham Park. No one goes to Baguio without visiting this area, where the central lake is flocked with romantic swan boats available for renting. I thought I wouldn’t be able to ride one, but later in the trip I joyfully did. 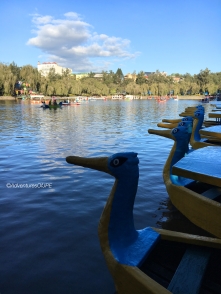 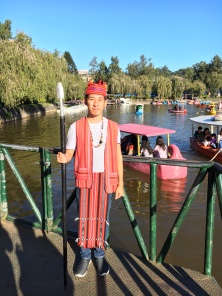 As I strolled the park, I grabbed the chance to try the unique Strawberry Taho which delighted my taste buds. I was then enticed to put on the traditional costume offered for a selfie pictorial worth PhP 10 each. Typical tourist traps. After it, I bought souvenirs from the local shops and headed to Baguio Cathedral. I took a rest there for a while, admiring the colorful designs of the window mosaics. 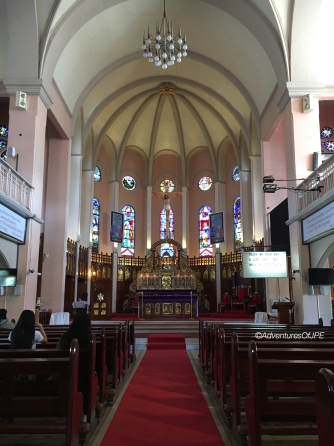 I ate my lunch at one of the fast food chains along the ever-crowded Session Road before checking in at my AirBnB room to take a nap. I only brought the essentials with me as I went out again, and continued my trip in the afternoon.

My first stop was SM City Baguio where I’ve seen most of the foreigners in the city, mostly Koreans and Chinese. It is the only mall I saw uncovered with glass, mainly because of the cool temperature there all-year round. I walked further, reaching the sights on the road such as the solemn Pink Sisters’ Convent, the haunted Laperal White House, the Botanical Garden, The Mansion, which is the official summer house of the President, the horse riders-filled Wright Park, Good Shepherd Convent, and finally the breathtaking Mines View Park. 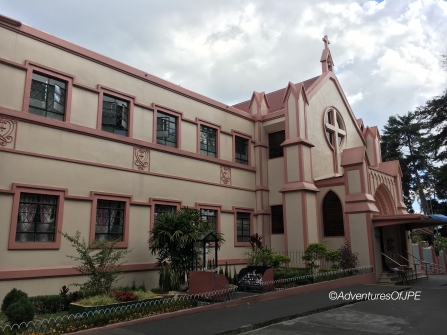 I spent most of my time at the latter in the afternoon until sunset where I saw the most beautiful sight in the city. I adored the sky as it exhibited a reddish color when the sun finally bade goodbye to the daytime. I then took my supper and went back to my dorm to have a good night’s sleep.

February 18 – Baguio City: I woke up at 6 o’clock in the morning as I planned to visit the Strawberry Farm in the nearby town of La Trinidad, which is about an hour away from Baguio. Discovering that my fellow AirBnB guests are headed to the same direction, I made friends with them during our discussion on the breakfast table then I asked to join. They didn’t hesitate.

My second day for the weekend trip was not spent alone. I was merry about it. We went together to see the actual strawberry fruits ready to be picked by customers, as well as the green and leafy lettuce plants at the further side of the field. It is also where I bought freshly-picked strawberries for my family and friends back home. 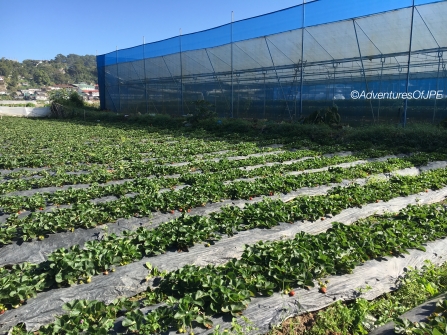 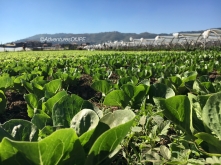 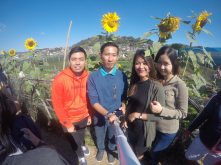 We tried the specialty ice cream before going to the next destination, the chromatic Colors of Stobosa – a village painted with different colors which appeared especially pleasing to the eyes. Passing back to the border of La Trinidad and Baguio, we visited the Chinese-designed Bell Church before going back to Session Road to have lunch. 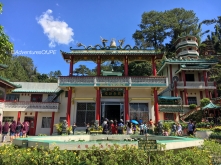 In the afternoon, I led my three new friends to the same destinations where I went on the previous day. I was finally able to ride the boats at Burnham Park with them, before going from Mines View Park downwards to The Mansion, Wright Park, and Botanical Garden. Our last destination was the infamous Heritage and Nature Park, which is commonly known as the old Diplomat Hotel. We actually arrived there few minutes past 6 pm, which is the closing time. Lucky enough, we were allowed by the security guard to enter the premises to take a look at the interior. As we walked towards the structure we already felt the spooky atmosphere it withholds, highlighted by the orange-colored lights used inside. We took photos for a while before immediately running outwards after one of us claimed to see apparitions on the second floor window. After observation of the park, we then went back to the dorm room to get our baggage and go back to the bus station. We had dinner there before catching the night bus to Manila. 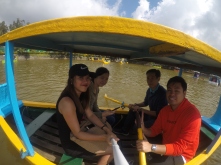 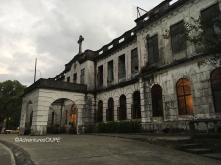 In these two days I spent in the city, I was thankful for having so much experiences. Not only I was able to see spectacular sights, enjoyed a different city vibe, tasted local delicacies, and felt a colder weather but also I was able to meet new people which instantly became dear to me. As I conclude the trip, I was surely happier than I first went. Truly, traveling makes me glad.

Special mention to my new friends: Rye, Cris, Maica, let’s have another trip together soon. See you again!